Free speech and women's rights have, for some time now, been on a collision course in India in no small measure, it would appear, because the manner in which the discourse relating to free speech in India has been set up by its proponents has been largely devoid of much nuance with a sledgehammer often being used to craft arguments where a chisel would have done better.

Amongst the many instances, in conversations both public and private, where the friction between free speech and women's rights (or, more specifically, the right against violence) has manifested itself are those:

There are areas in which the law is beginning to be clarified (albeit not really in India). On July 14, 2016, for example, the FBI released a statement on distinguishing between Free Speech and Threatening Speech. It read in relevant part:

"Free speech, however, cannot be misconstrued to include directed threats toward another individual, group, or location. Once threatening speech is directed toward a specific person; a group of people, including law enforcement agencies or ethnic communities; or specific locations in a community, it can be viewed as a credible threat. Individuals who communicate threats may be subject to prosecution."

The fact of the matter is that free speech does not exist in a vacuum and, at some point, a balance will have to be found in India weighing free speech against the provisions of the law and with women's rights. There is no case, ethical or Constitutional, for absolute free speech. In fact, the Constitution clearly envisages circumstances in which free speech can be legitimately curtailed. Further, given both the prevalence of violence against women in India and the horrendously skewed sex ratio of the country, perhaps there is also a case to be made for not attempting to challenge legal restrictions to free speech which help protect women's rights. Free speech is critical. It is not sacrosanct though and should not take precedence over a woman's right to remain alive and to be able to live an abuse-free life. 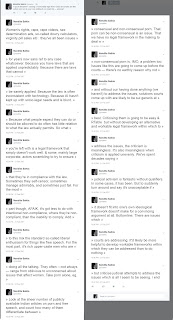 It's far from clear what the legal solutions could be or what the statutory basis for some of the judicial attempts to address issues where FOE and VAW converge is. Focussing on what, in SocMed terms, is being described as a "constitutional crisis" is not, in and of itself, esp. productive. Reproducing the text of a tweetstorm on the subject here:


» quick disclaimer: running a reasonably high fever today and brains are like cotton wool so do your own editing if you read this — anyway!

(This post is by Nandita Saikia and was first published at Indian Copyright.)

This site is supported by FrontierNxt.

In this blog and elsewhere...

A look at how the Indian Copyright Act, 1957, as amended in 2012, interacts with art (other than films and sound recordings), and, in particular, with Indian art. The first part of this text comprises a feminist and post-colonial reading of the Indian copyright statute while later parts focus on interpreting the provisions of the statute in relation to art.
Last revised: 2017
(Available here: SSRN)

An examination of the provisions of the 2012 amendments to the 1957 Indian Copyright Act which affect the film and music industry. The paper takes into consideration the factual background in which the amendments were made and explores whether they are likely to realise their objectives.
Last revised: 2013
(Available here: SSRN)